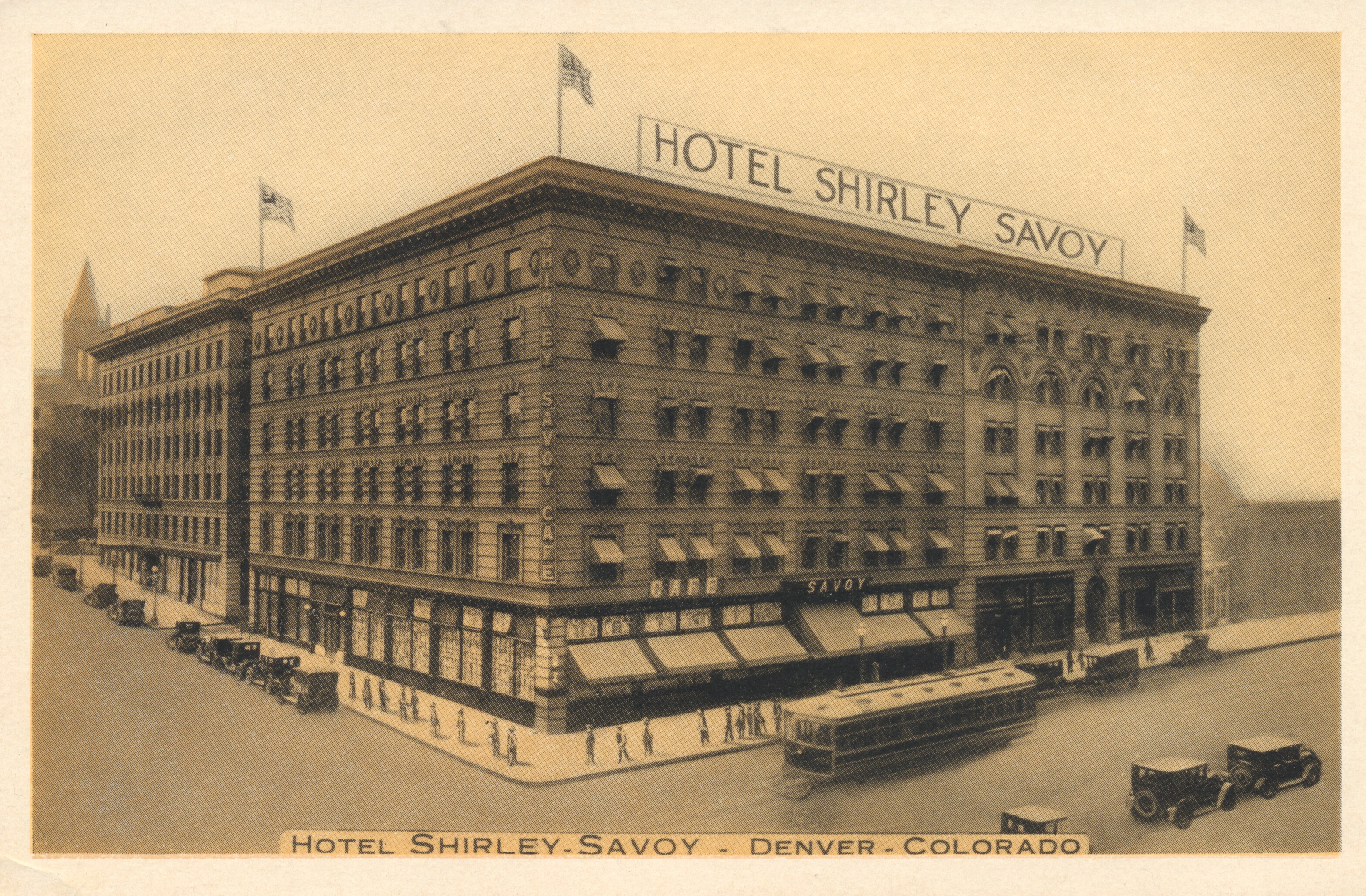 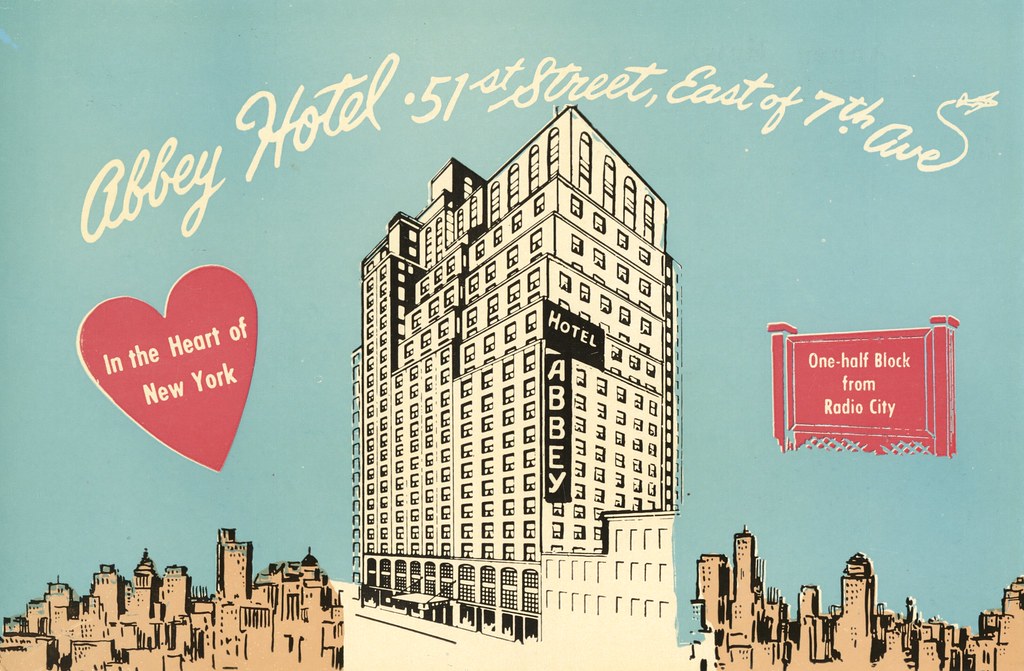 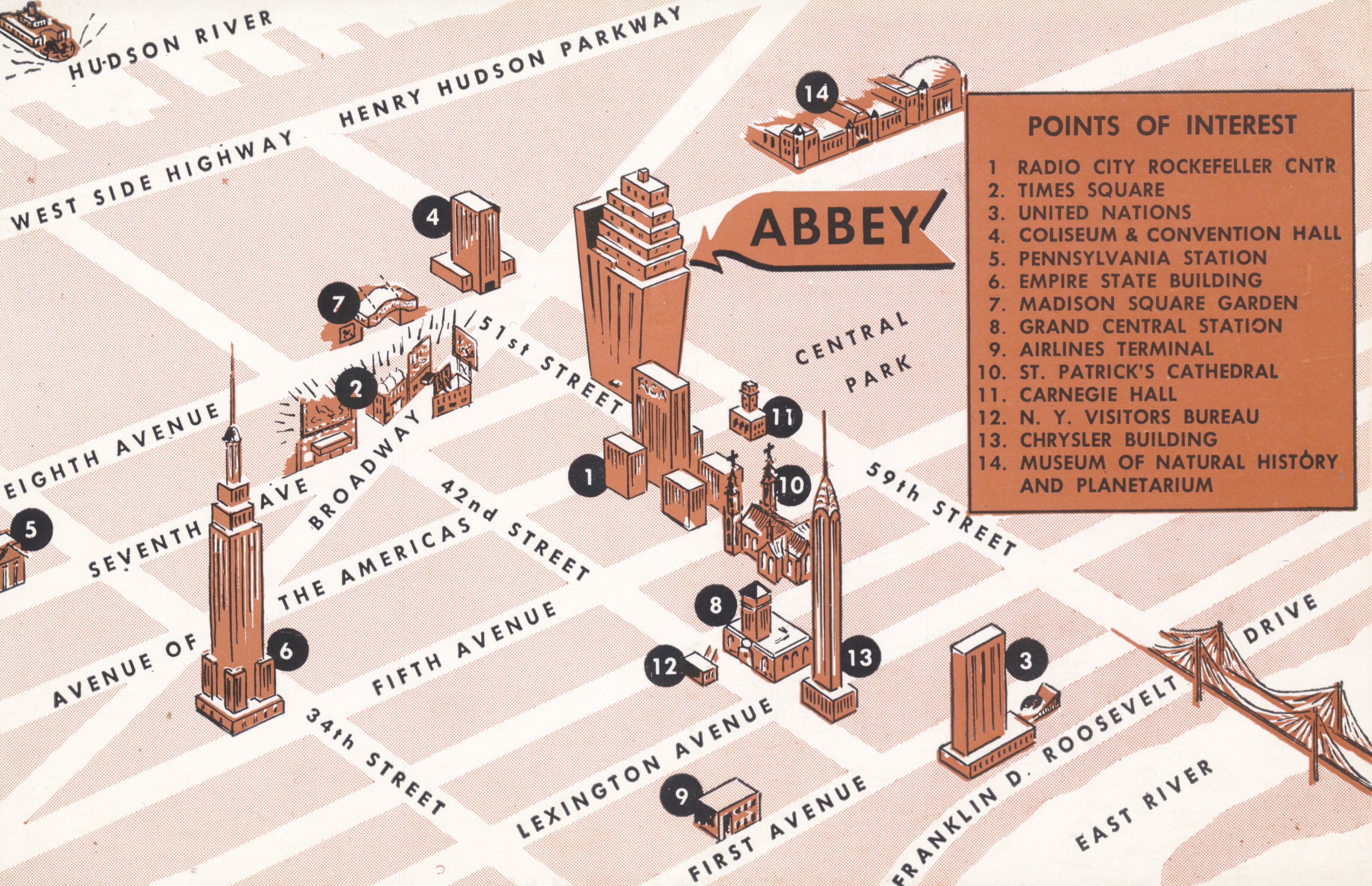 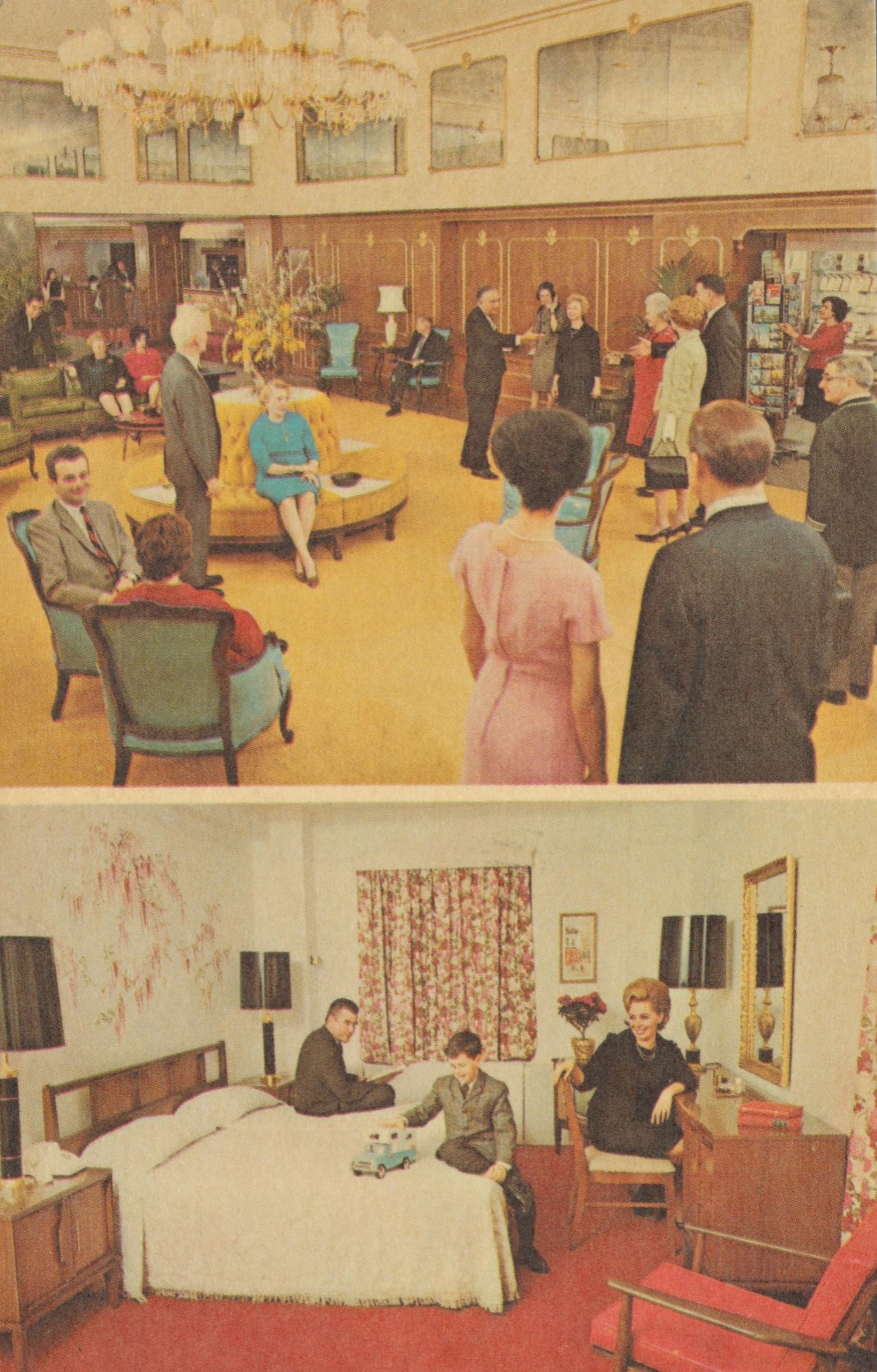 Writing on the back:
Dated 9/29/67
We dined at this beautiful spot last evening, lots of good things to eat. The Abbey V. is very good having a wonderful time. Hope you are too.
Love, Alice & Phil 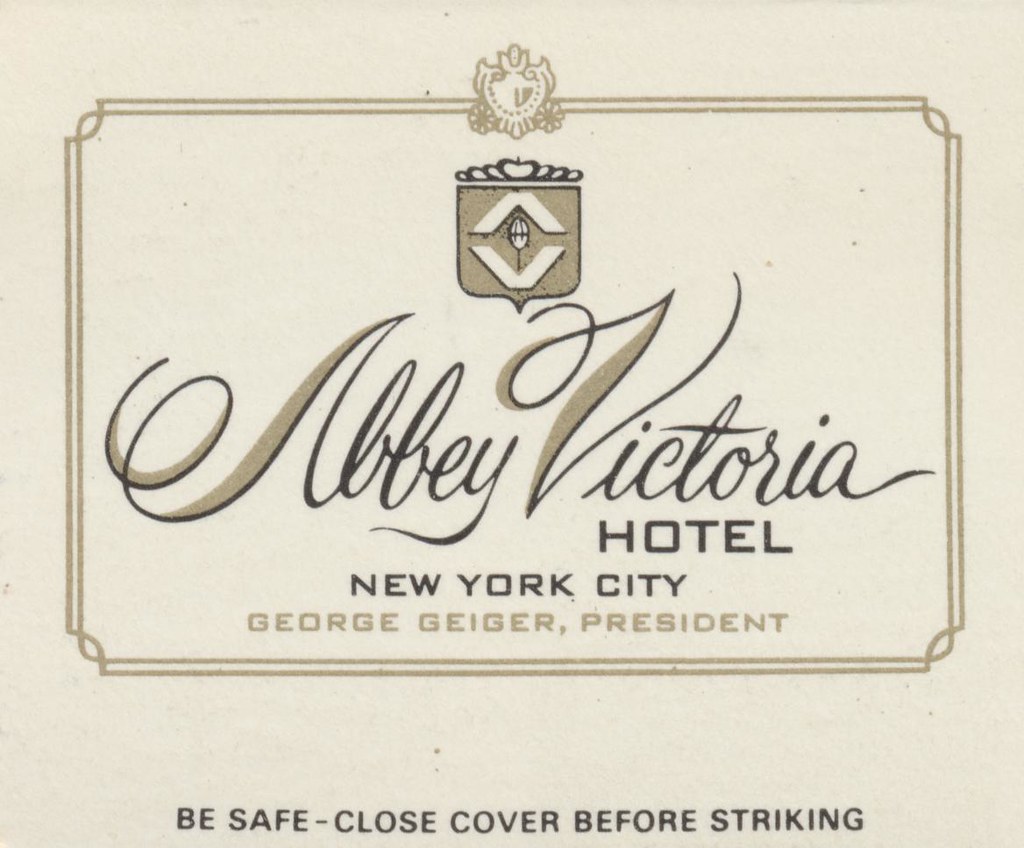 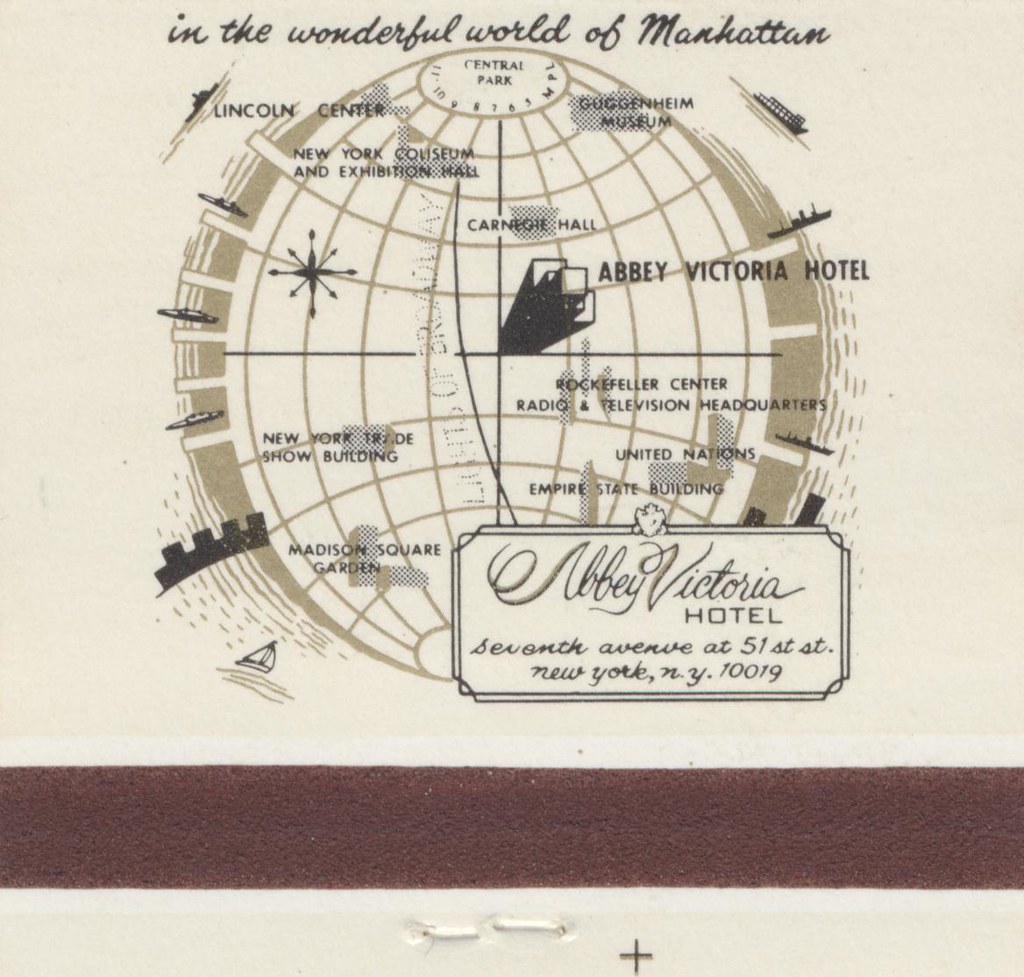 Seventh Ave. at 51st St.
In The Wonderful World of Manhattan 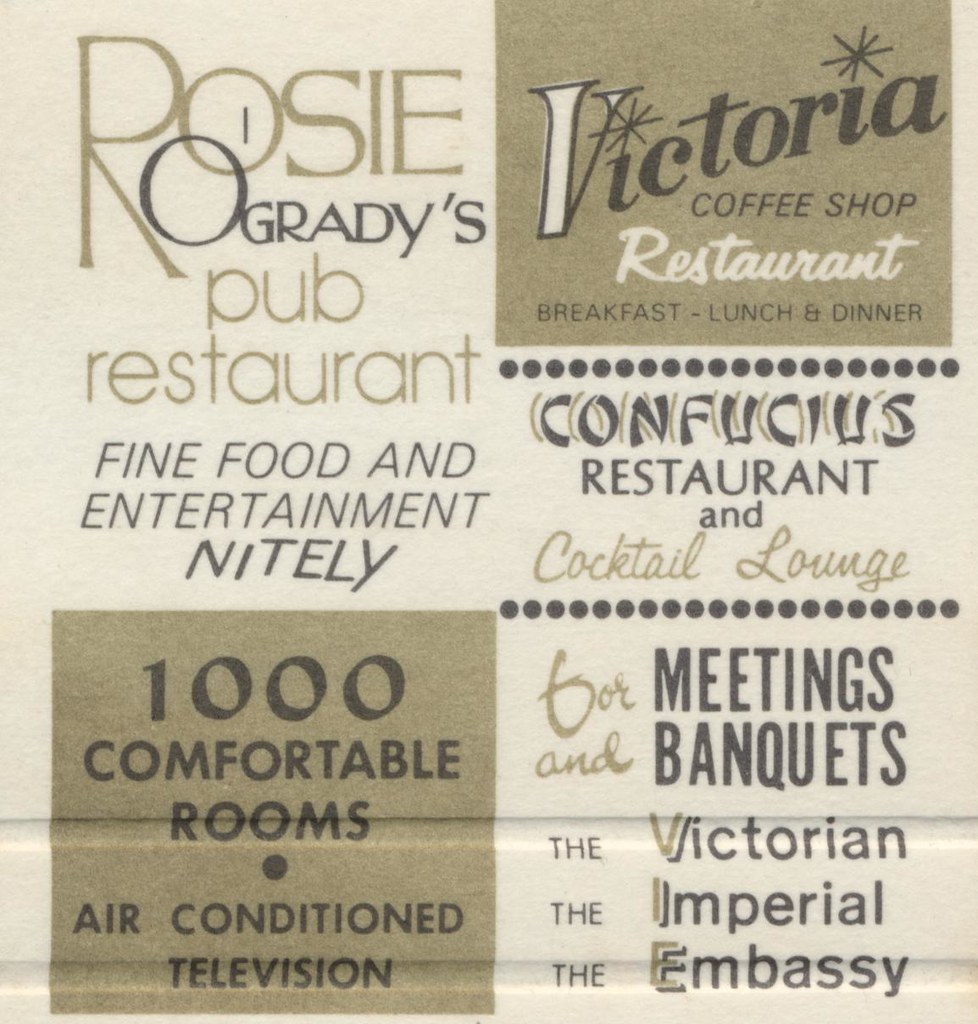 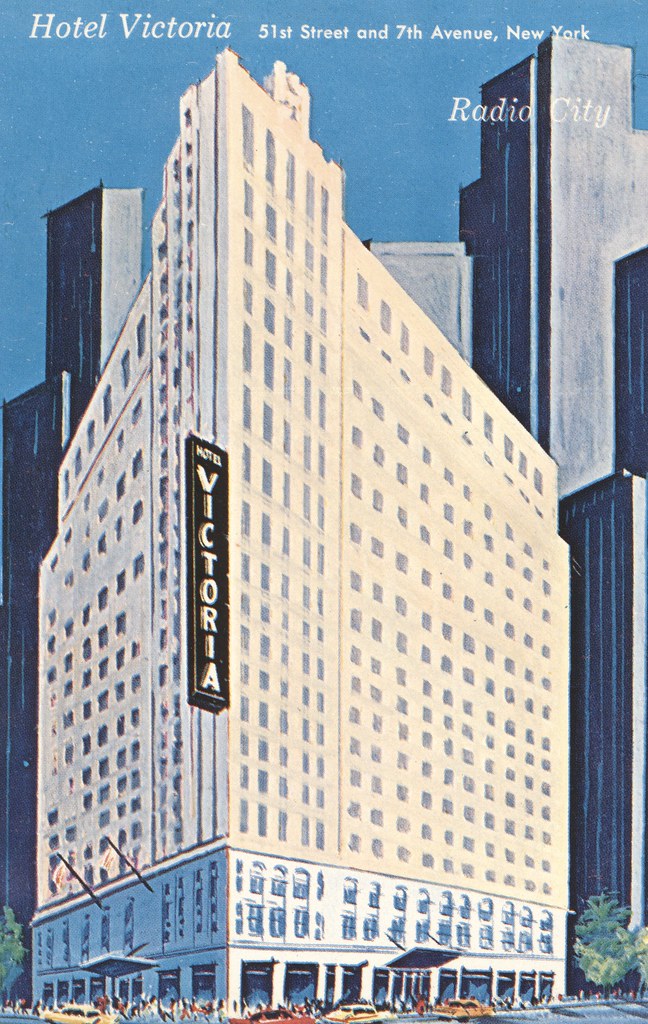 STATUS: The Abbey was torn down in 1982. Here's a brief article in the New York Times about the demise of the Abbey.

It was the Abbey Victoria Hotel, then the Abbey and Victoria Hotels and, later, back again. In recent years it was simply the ''Shabby Abbey.'' Now it is being demolished to make way for the expansion of the headquarters of the Equitable Life Assurance Society of the United States.

Spokesmen for the company, a major owner of Manhattan properties, said plans for the new office tower were not complete yet. It will run from 51st to 52d Street on Seventh Avenue, behind the present 42-story headquarters building at 1285 Avenue of the Americas. That tower was completed 20 years ago as an pioneer project in the avenue's redevelopment.

The hotel was built in 1927 and was divided into the Abbey and Victoria Hotels for the World's Fair in 1939. It stood as a house divided for years, but merged in 1966 to share mechanical and operating costs.
Posted by Jordan Smith at Wednesday, December 02, 2015 No comments: 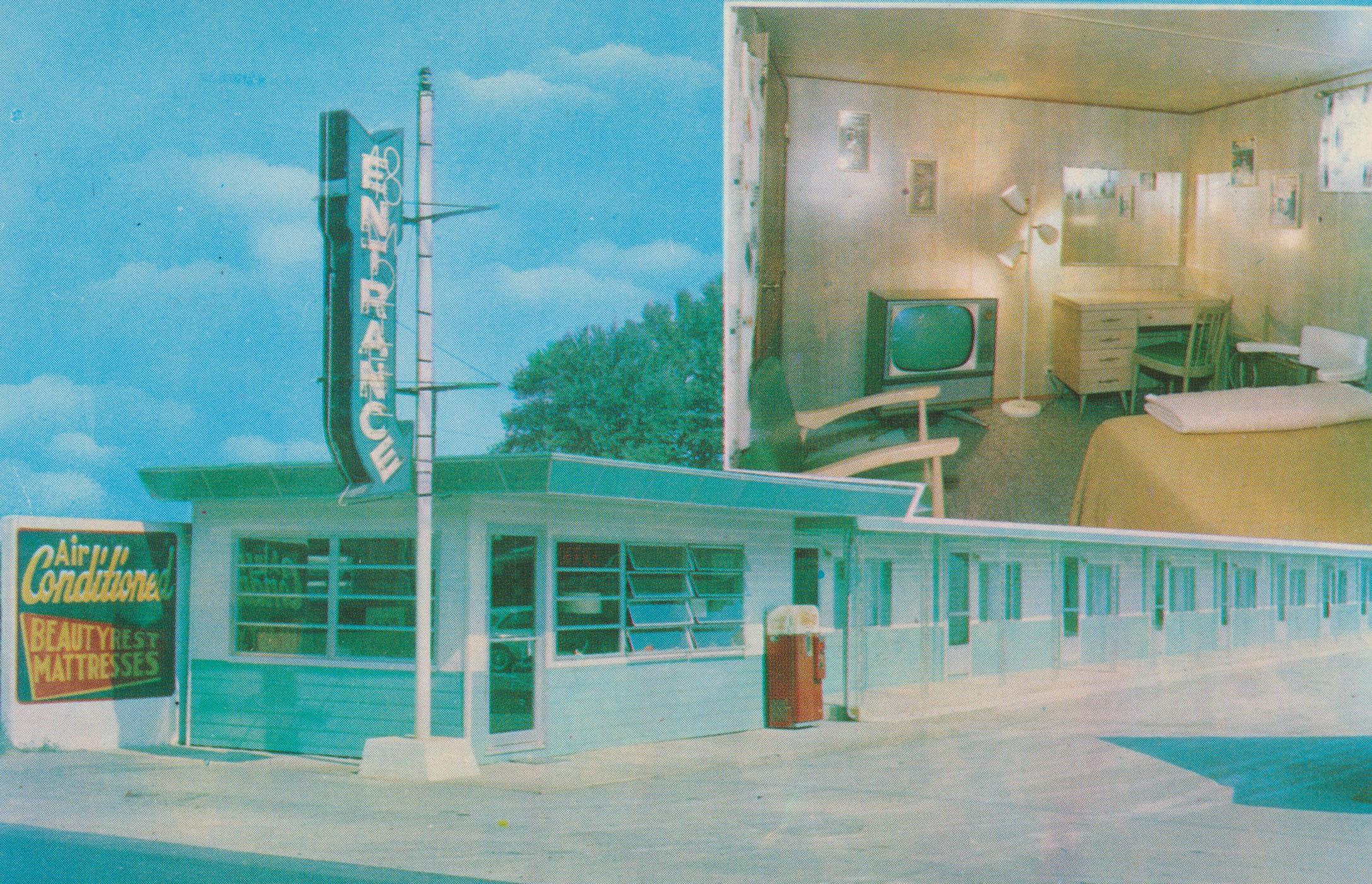 STATUS: It is now known as the Jefferson Motel. The sign and the great Coke machine are gone.

Posted by Jordan Smith at Tuesday, December 01, 2015 No comments: 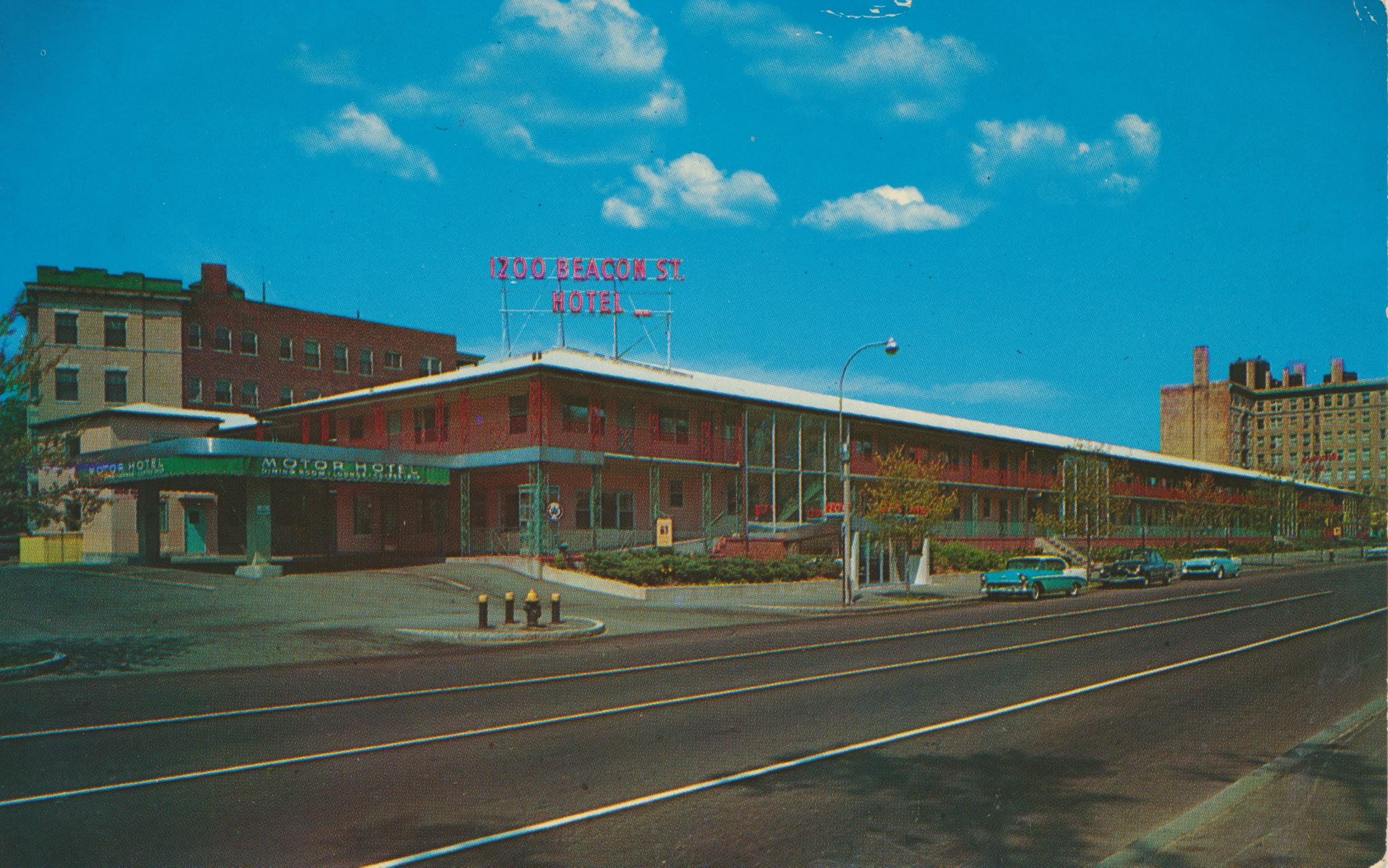 
Status: GONE - A Holiday Inn is at this location.

Posted by Jordan Smith at Tuesday, December 01, 2015 No comments: 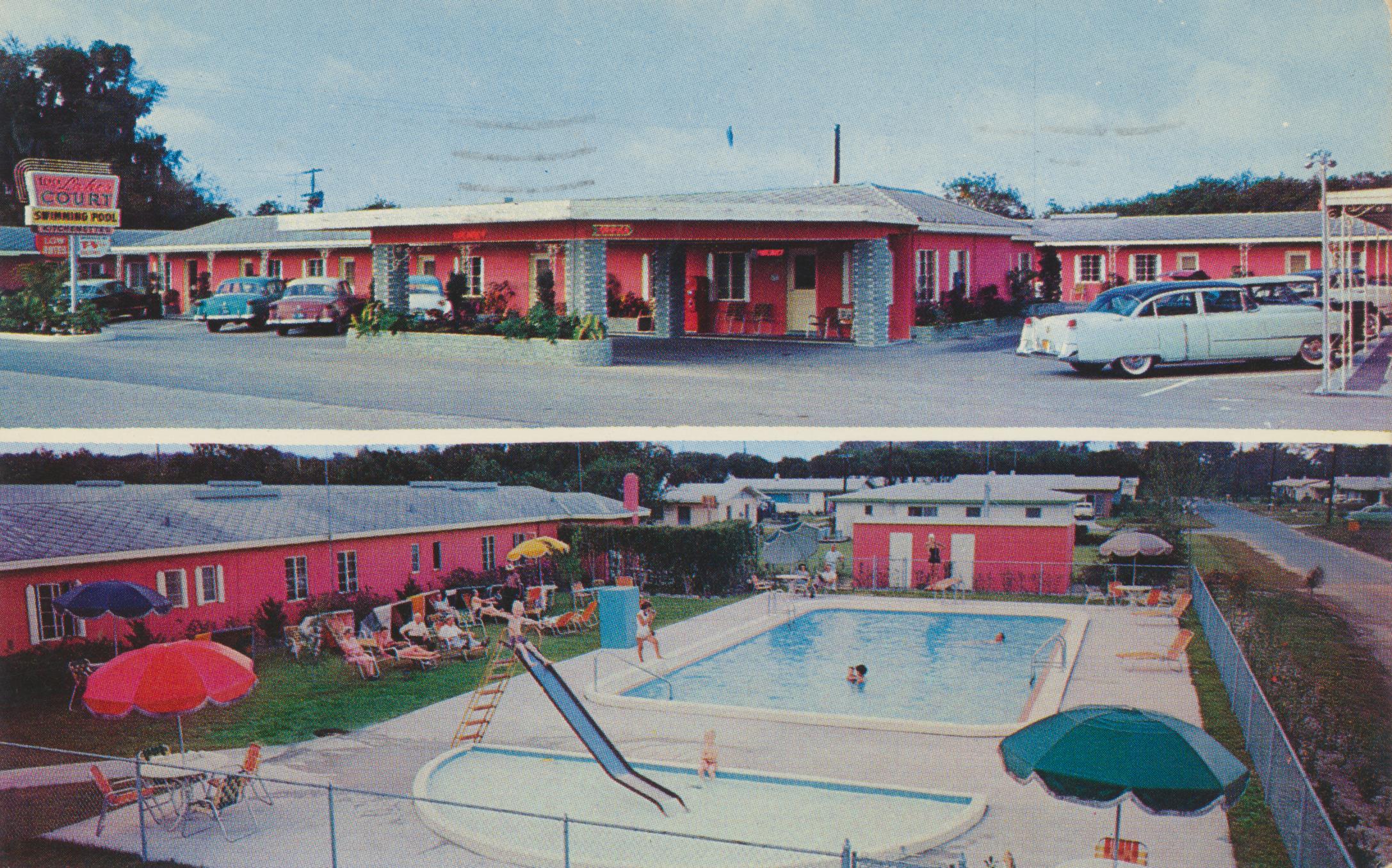 Mailed from Bradenton, Florida to Mr. and Mrs. Wm. Taylor of Scottland, Illinois on February 24, 1957:

STATUS: Unknown. I cannot find any information on the exact location.
Posted by Jordan Smith at Tuesday, December 01, 2015 No comments: 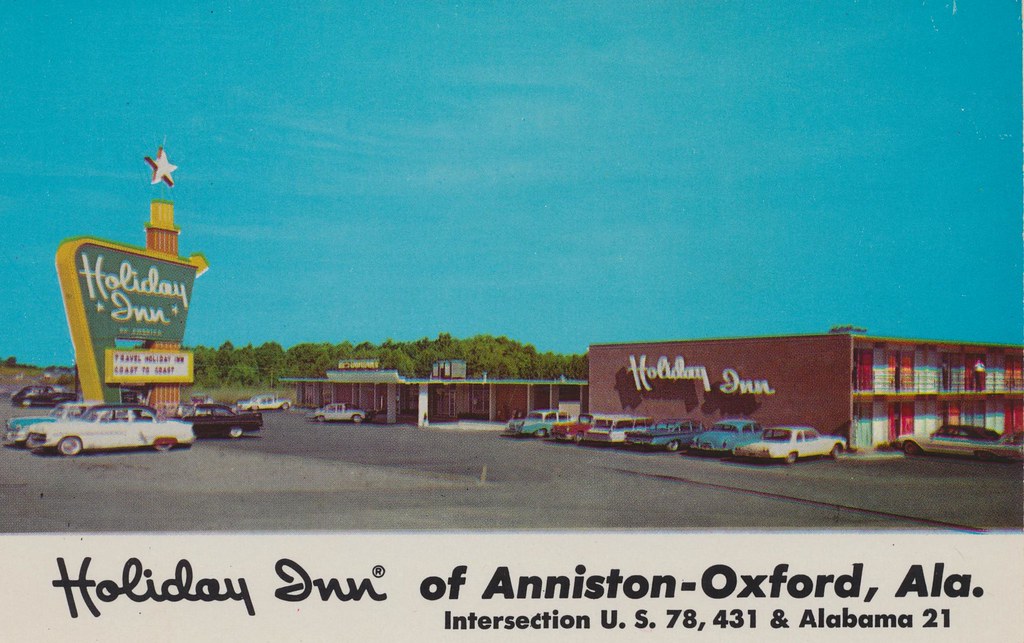 A fairly standard early 1960s Holiday Inn design. The postcard shows the Great Sign, the exterior layout, cars in the parking lot,  a restaurant (not sure the name-can't find it anywhere) and a very early photocropping job of the sky. You can see it in the lines on the tress and the majestic splendor of nature's blurs.

The card is from a few years before the guide based on the cars.

The property went through a few changes, but I am pretty sure that this is the location. The exterior was painted, the Holiday Inn signage on the building gone and the sign has the all the marking of the 80s Holiday Inn signs that replaced the GREAT sign. The property fell on hard times and became, at one point, Oxford Inn and Suites.

Here's an aerial photograph dated January 7, 2004. (thanks to Google Earth) It's difficult to tell if it is still a Holiday Inn or not. It has the trade mark lay-out. 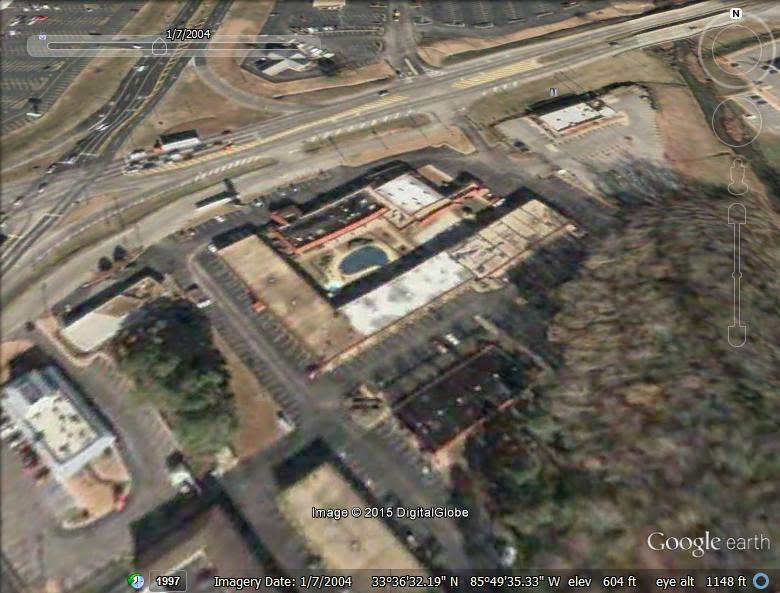 A 2008 Google Maps street view of the Oxford Inn and Suites:


An undated, but probably 2012 aerial photo of the property being torn down 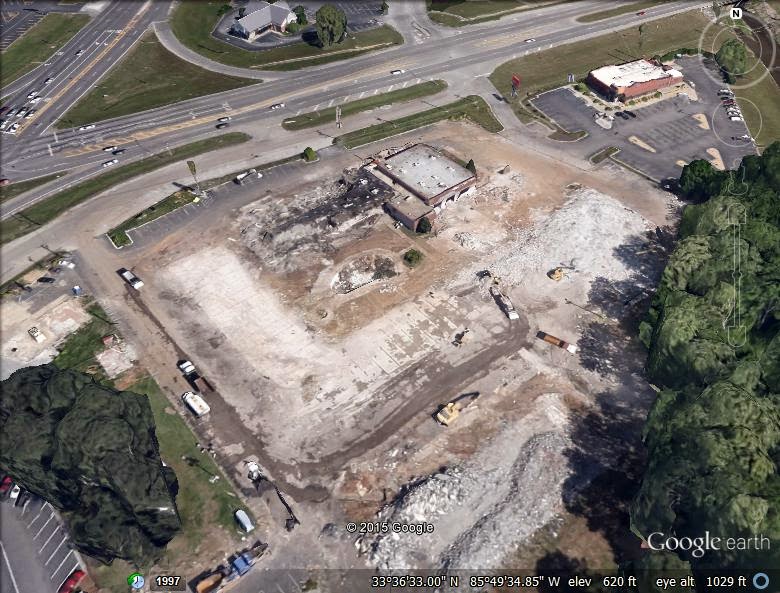 The final aerial view taken on November 28, 2012 shows only the outline of the motel 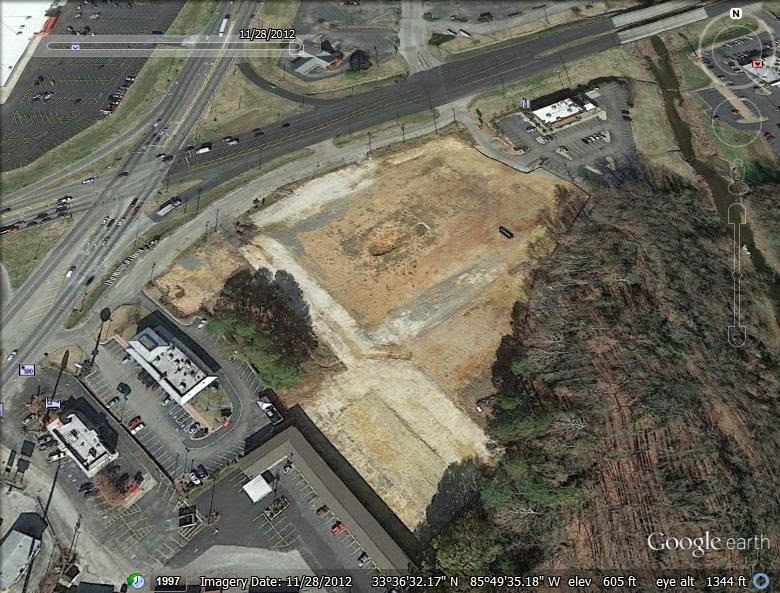 The final street view from 2014 shows that there's an empty field and a Bojangles on the current site.There is a newer Holiday Inn Hotel and Suites just down 431 on Colonial Drive. 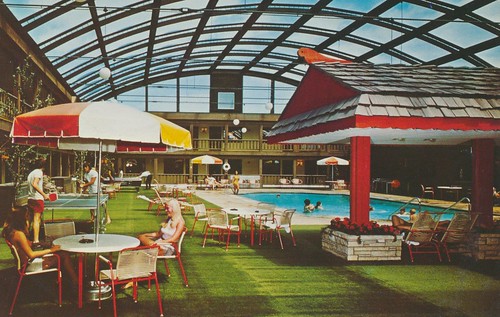 Situated in Fishing Creek Valley, in the Mountains of Pennsylvania, yet only fifteen minutes drive from the heart of downtown Harrisburg, this beautiful and modern hotel provides quiet and comfort, combines with convenience, at a location which is at an address of distinction.
Catering to Banquets, Wedding Receptions, Private Parties, and Business Meetings. Rooms have carpeted floors, tile bath and shower. Blue Room free for ladies' card parties.
FAMOUS FOR FINE FOOD
Phones CE-91239 - CE-49040
Harrisburg, Pa.
Yours for a successful evening
W.M. Hollinger - Pres. 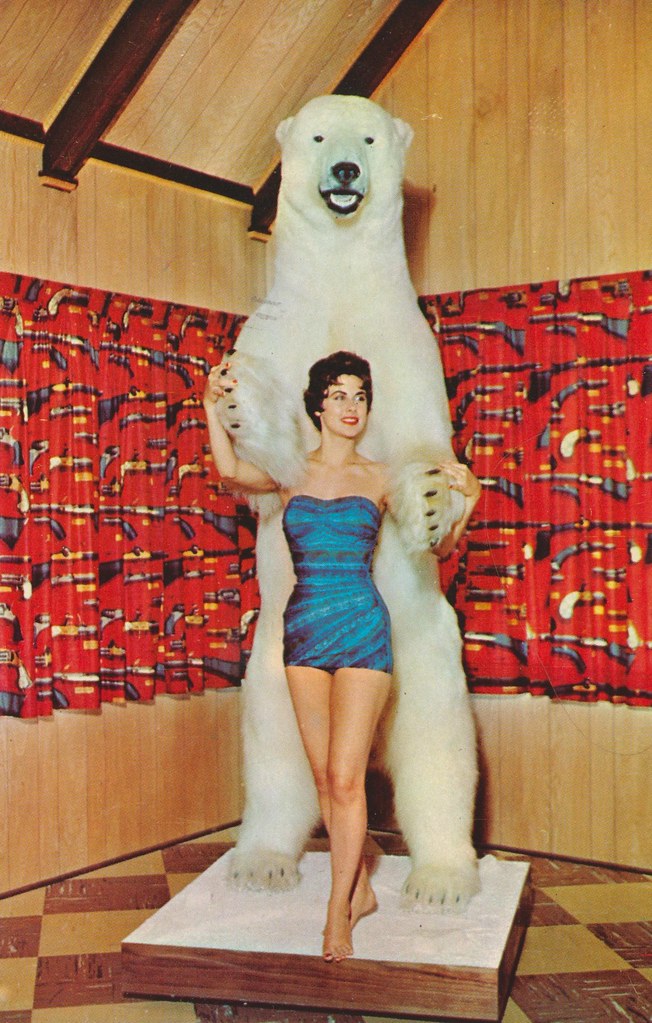 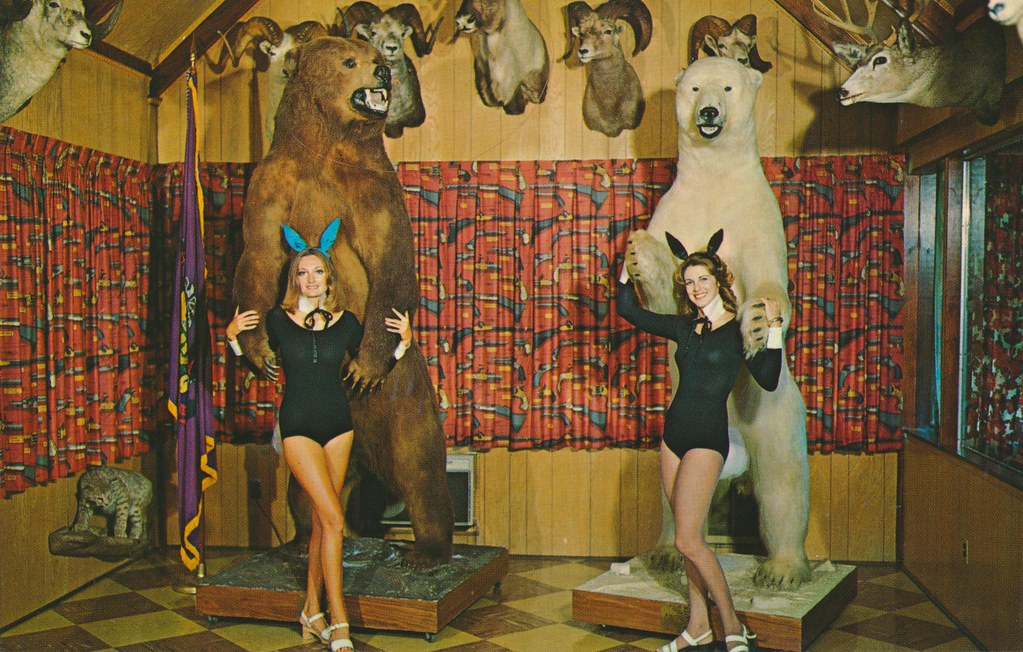 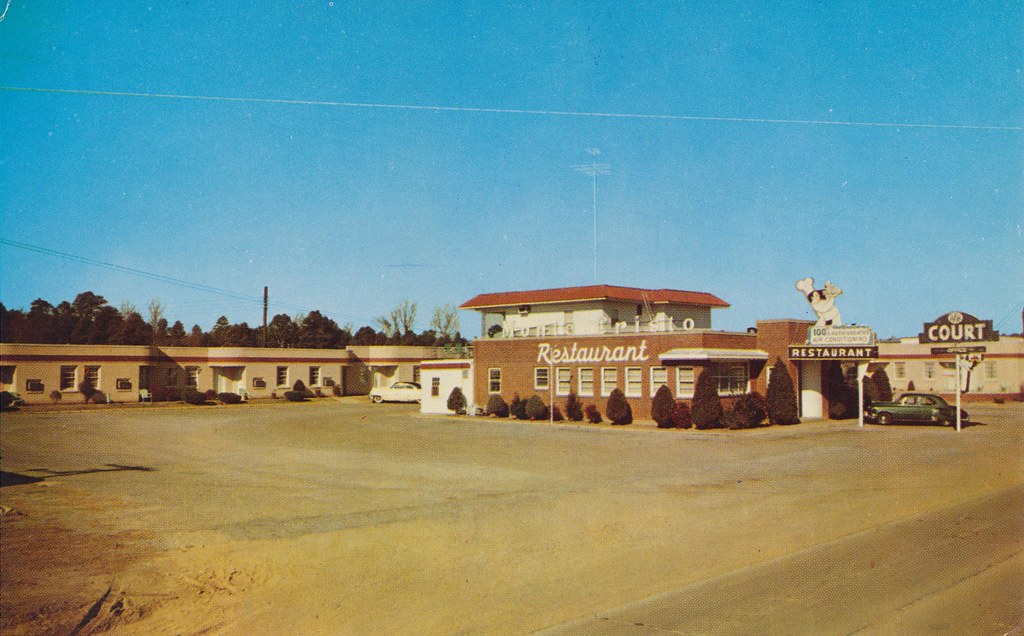 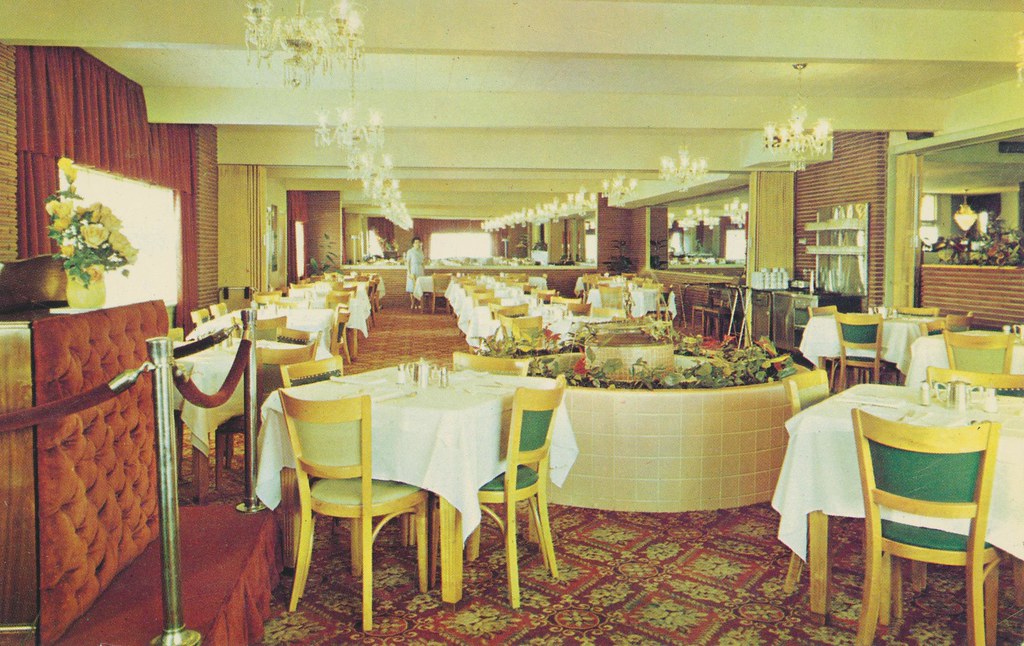 All postcards in this collection are from The Cardboard America Archives unless otherwise stated.

Want to use an image? Images not working? Questions? Concerns?
cardboardamerica@gmail.com